What should Christians make of the conspiracy theories surrounding Coronavirus?

What should Christians make of the conspiracy theories surrounding Coronavirus?

I wish I could just say, not much, and leave it at that. After all, God warned Isaiah “Do not call conspiracy all that this people calls conspiracy, and do not fear what they fear, nor be in dread,” (Isaiah 8:12). Paul told Timothy to “Have nothing to do with foolish, ignorant controversies;” reminding him that,“you know that they breed quarrels,” (2Timothy 2:23).

The sad reality is, however, that despite these warnings, many believers fall victim to conspiracy theories, and some of them—at this point in history—even have the potential to kill.

Is the Coronavirus illness caused by the introduction of 5G?

This ought to be easy enough to de-bunk, but sadly, when a few undeniable facts are put together, and an unhealthy dose of fear is thrown in (along with the theory being proposed) unquestioning people are easy prey. The tragedy is that many otherwise capable people seem to switch off their critical thinking, and fail to ask basic questions which would expose the shaky foundations of the conspiracy theory.

For instance, if Covid-19 symptoms were really caused by 5G, then they might be expected to occur in large numbers of people at the same time, since, once 5G is switched on, we would pretty-much all be exposed to the same radiation at the same time.The reality is that the symptoms don’t appear simultaneously in large numbers. They begin in very small numbers and then gradually increase, until more and more people get sick. Why is that?

Also, why do symptoms start with one member of a family, who progresses through the course of the disease, and then another, and then another, almost as if it were a virus being passed from one person to another? Could it be that it is actually a virus, and not radiation?

How should Christians evaluate conspiracy theories?

First of all, Christians should be concerned for accuracy and truthfulness, and be well aware that people will often willingly distort the truth and lie for any number of reasons. We should not naively believe what we’re told, whether that comes from the government, or a friend, or a conspiracy theory website.

Of course it is true that a government can have an agenda in the message it conveys, but so can conspiracy theorists. History teaches us that yes, governments have deceived their people, and sought to manipulate the media, but it also teaches us that there have been large groups of people taken in by conspiracy theories, and driven to the most disastrous actions by their beliefs.

How do we navigate the mess? Here’s a few pointers:

1. Learn to ask questions that evaluate the truthfulness of the claims being made.

For example: The claim that 5G radiation is the cause of the coronavirus symptoms, is supported by an appeal to the history of pandemics.The Spanish Flu of 1918-19 is linked by the conspiracy theorists to the electrification of the world that took place at that time, and the epidemic following World War II is linked to the introduction of radar.

Questions to ask: What about the bubonic plague of the 16th and 17th centuries? What about the smallpox epidemic that wiped out so many Native Americans? Both were before electrification.

For another example: The claim is made that 5G is being used as a weapon, and

compulsory vaccination is part of a plot to implant either aluminium into our bodies, in order to make us more vulnerable to the 5G radiation, or to make us accept the mark of the beast, in the form of a microchip or microdot tattoo, that identifies us as vaccinated.

Questions to ask: How could people cover up such a conspiracy, given that the children of so many thousands of conspirators would themselves be vaccinated, and intentionally harmed?

2. Remember we are commanded to pray for and submit to the governing authorities

Romans 13:1-7, and 1 Peter 2:13-17 teach God’s people to voluntarily submit ourselves to those who are in authority over us, recognising that they are placed in that position by God.We are even to “Honour the emperor” (2 Peter 3:17), when the emperor is someone as corrupt as Nero, in Peter’s day.

That does not mean we blindly believe that our leaders have our best interests at heart, or refuse to question any policies or practices that appear to us to be misguided, but it does mean that our fundamental stance as Christians ought not to be one of resistance, but one of submission to authority.

Christians are to spend their energies praying “for kings and all who are in high positions,” (1 Timothy 2:1-2), and not joining in with those who are rebellious (Proverbs 24:21).

If you read the book of proverbs, you learn that the path to knowledge and success involves hard work (Proverbs 14:23; 12:24). Christians, of all people, ought to be people who reject lazy thinking. Why do fools despise wisdom and instruction? Often because they want to simply trust in the conclusions of their own minds, without taking the time and effort to check their thinking.The verdict of the Bible on this kind of approach to learning is stark:“Whoever trusts in his own mind is a fool,” (Proverbs 28:26).

It is worth remembering that it was this kind of thinking in the Christian world that gave birth to the scientific method, with its emphasis on not simply trusting your own hunches or conclusions, but seeking to test and prove whether something is true, based on evidence. It is a tragedy of lazy thinking, when poorly informed Christians embrace half-baked ideas with little or no respect for the rigorous thinking that goes into true scientific research and conclusions. Of course it is sadly true, that not all scientific research is to be trusted, and there are awful examples which can make people naturally slow to trust “the scientists”—but Christians, of all people, ought not to despise the fruits of hard work and careful study. We need to be those who learn to spot lazy thinking and reject that.

4. Don’t judge people in authority, in a way you wouldn’t want to be judged!

Conspiracy theories, by definition, require the assumption of guilt without proof. “They” are out to get you, or rule the world, or reduce the population, etc. It’s worth stopping and asking who “they” are!

When you ask that, you have to also put yourself in the shoes of the people you’re assuming are part of the conspiracy, and ask the question,“How do I know this to be true?” “Am I judging this person as guilty, without even questioning my own assumptions?”

5. Don’t be too easily impressed by authenticity

Just because someone really believes what they are saying, doesn’t make it true. Be a Berean.

6. Study eschatology carefully, and learn from people who carefully explain the text in context

So much worry and needless trouble could be saved if the church actually didn’t shy away from studying eschatology carefully and thoroughly. Sadly, many Christian leaders have consigned eschatology to the unknowable, and the only teaching most Christians have on the subject comes from people who handle the scripture incredibly badly!

Actually taking the time to study what the Bible says about the future, puts to rest so many of the crazy ideas that otherwise gather momentum among biblically illiterate Christians. 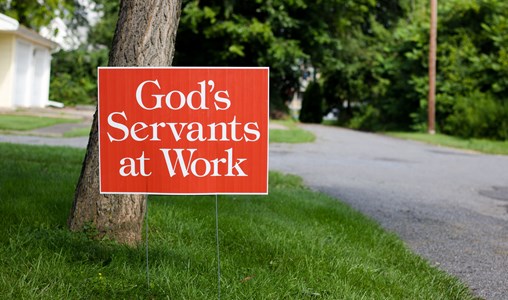